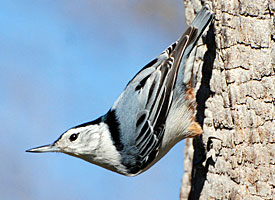 My forested suburban backyard is abuzz on this autumnal morning with the soundtrack of life. The deejay is the Northern Mockingbird, who has worked all summer long on his repertoire, sampling the songs of everyone else, keeping the bits he likes, rearranging them, altering the pitch and tempo. Now that the transient and noisy summer residents have gone south to warmer climates and greener pastures, he dominates the forest with his endless mixtape of three-note beats stolen from the warblers and robins and vireos. Tootle tootle tootle. Cheap cheap cheap. Purdee purdee purdee. Whew whew whew. On and on, endlessly. He will add to his magnum opus throughout his entire life, endlessly tinkering and modifying, like a jazz musician playing the world’s longest improv set.

Overhead, the arboreal acrobats, Sciurus carolinensis, eastern gray squirrels, are hard at work stocking up for the winter. The oak trees are their Costco, and this year is a mast year. Acorns are cheap, come buy wholesale and save, save, save! Walking in the forest is like treading on marbles with all the large round acorns underfoot. Joining them in the acorn shopping spree is the noisy Blue Jay, the smallest member of the Corvid family (crows, ravens, jays, magpies and nutcrackers) that calls our area home. The Blue Jay is the Snooki of the bird world—loud, brash, bullying and endlessly self-absorbed. If there were mirrors in the tree canopy, Blue Jays would spend endless hours preening and admiring their own reflections.

Adding to the chorus is the nasally wha wha wha of the White-breasted Nuthatch, who climbs down a tree trunk the way an Australian daredevil rappels down a building, face first.  A Carolina Chickadee erupts with a squeak like that of a dog’s chew toy, sicka sicka dee dee dee, sicka dee dee dee dee.  It is one of the few birds, like a cuckoo, whose name is an onomatopoeia. The Tufted Titmouse, like a tiny Elvis with his reverse pompadour, sits high in a sweetgum and sings out clearly and endlessly peter peter peter. A flock of Dark-eyed Juncos flit through, with their metallic chip chip sounds, like coins jingling in a pocket, and they startle a Red-bellied Woodpecker who flies to a nearby snag and voices his displeasure with a loud chur chur chur.

A group of House Sparrows swarms the feeder, selfishly gobbling up the sorghum and millet for themselves. Like a true bird nerd, I despise these Old World invaders, and would gladly see them gone, but alas, they too have to eat, and I won’t begrudge them a meal. Like them or not, they are a fact of life now and they aren’t going away. At what point do we stop making a distinction between native species and introduced exotics? House Sparrows have been in America for nearly 200 years and have done very well for themselves. Perhaps we should congratulate them on their tenacity rather than despise them for their invasiveness?

What’s this other song I hear? This loud cacophony that drowns out every other song of the forest? It is the song of the lazy suburbanite asshole with a gasoline-powered leaf blower, spewing hydrocarbons into the atmosphere at 3,000 revolutions per minute. His artificial wind moves the leaves from his own sterile expanse of chemically-treated and genetically modified monoculture of a lawn over to his neighbor’s, where the natural wind will surely reverse his pointless endeavor in short order. When I am King, I shall proclaim an absolute ban on gasoline powered leaf blowers, surely man’s most egregious display of hubris! Raking shall be permitted, encouraged even. Earthworms shall be distributed free of charge along with detailed instructions on backyard composting. Vigorous lawn raking will also help combat our national obesity epidemic, thus killing two birds with one stone.

To further complete my fantasy of a utopian ecological paradise, I imagine a world in which every household is required to grow at least one edible vegetable, watered by recycled gray water or captured rainwater runoff, and fed by composted household waste. A world in which every house must produce a meaningful portion of its own electrical needs through rooftop solar panels and backyard wind turbines, biogas generators and other such renewable sources. A world in which the banshee-like scream of a gasoline powered leafblower is never again to be heard.

Why can’t such a vision become reality? We have the power within us to make it so. I have given over my entire backyard to the production of vegetables, growing kale, collards, chard, carrots, peppers, tomatoes, eggplant, squash, melons and sunflowers for the birds; all on a tiny postage-stamp sized piece of land. In the front yard I embrace biodiversity. Let there be weeds! I mow only with a human-powered reel mower and an electric string trimmer. No chemicals will ever be dumped upon my land under my stewardship, either in the form of fertilizer or pesticide. If not for the complete shade covering our south-facing rooftop I would cover my house with solar panels as well.  A more sustainable lifestyle is my choice, but if I were an absolute monarch, I would mandate it for everyone.

Overhead a Red-tailed Hawk soars over the narrow riparian tree canopy behind our house as the leaf-blowing maniac finally puts away his machine and heads back indoors to his televised idiot box.

There is life again in suburbia!

One Reply to “Autumn Birdsong”