I am finally getting around to finishing this photo series documenting my travel history over the past 11 years with WWF. I started it as a way to commemorate 10 years with the organization. Little did I know that I wouldn’t make it to my 11th anniversary. Life had other plans. But I’m excited to be starting a new job soon, and continuing to travel to great places for work.

The final part of the 2010 series is from a trip I took to Namibia with my father to celebrate his 60th birthday. It was a combination of hunting and tourism. I won’t include photos of dead animals, just because.

We hunted on a privately owned farm near Dordabis managed by a Namibian co-worker that is approximately 50,000 acres. His cousin had purchased the farm and then died in a car crash. For several years while the farm was in legal limbo nothing was done and the wildlife became overcrowded. During the drought of 2010 the situation was getting serious, and so the manager wanted to reduce population numbers in order to ease pressure on the habitat and hopefully prevent a large scale die off from starvation. In Namibia, game meat can be sold legally, so farmers often take wild game carcasses to the butchery to be paid by the kilogram. We were not trophy hunting, we were culling animals for meat on behalf of the farmer. Same as taking beef to the butcher, only the animals are killed in the wild rather than in a slaughterhouse.

We stayed a week on the farm, hunting with my friend Theunis and his uncle Theo. In total we hunted springbok, red hartebeest, eland, gemsbok and ostrich. The meat was hung to cool in an innovative evaporative cooling house that uses water running over charcoal to cool the air. But it was so cold at night (well below freezing, around 24 degrees F) that the meat had no trouble cooling down. At the end of the week the game carcasses were loaded and taken to the local butchery to be sold. Which is why you can buy game sausage or steaks at any supermarket in Namibia and eat a gemsbok or kudu steak at nearly any restaurant in the country.

From Dordabis we rented a Nissan 4×4 bakkie in Windhoek and a rented a tent and camping gear and drove north toward Etosha. We spent the next week in northwest Namibia and on the Skeleton Coast, camping and viewing wildlife in the parks in one of the most remote and least densely populated places on earth. 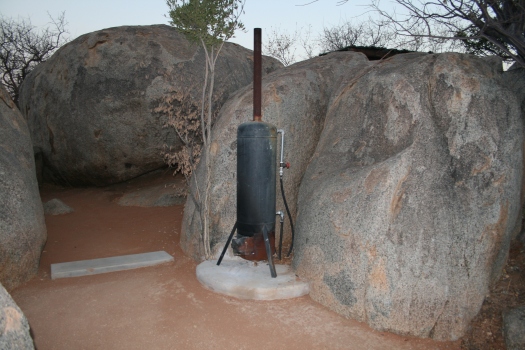 My Tweets
Follow Upscale Shack on WordPress.com
Join 423 other subscribers