Liberia. Literally the land of liberty. Africa’s oldest republic. An independent nation since 1847, yet it remains one of the poorest places in the world in per-capita GDP, sandwiched between Tokelau and DR Congo. Don’t worry, I had never heard of Tokelau either. It’s a group of 1,200 Polynesians on a couple of small atolls in the South Pacific.

Liberia is an English-speaking nation the size of Ohio surrounded by a lot of Francophone countries. Founded as a colony by freed slaves and free-born African-Americans in the 1820’s, the American influence is palpable. Unfortunately, the newly-independent oppressed did some oppressing of their own by subjugating the indigenous Africans they found already living here. Many of the first settlers, but especially their leaders, were relatively wealthy mixed-race free-born Americans. Some of the first Liberian presidents were only 1/8th or even 1/16th black, by ancestry. They would have been legally recognized as white in many pre-Civil War American states. These colonists came with American clothes, houses, ideals and culture. Determined to create a black America abroad, they founded a republic based on the American system of democracy. The new arrivals were African by ancestry, but they had not been born in Africa, and knew little about it. It took them a long time to learn how to survive, as Liberia’s 10th president, Alfred Russell said,  “It was so long before we could find Africa out, how to live in it, and what to do to live, that it all most cost us death seeking life.” 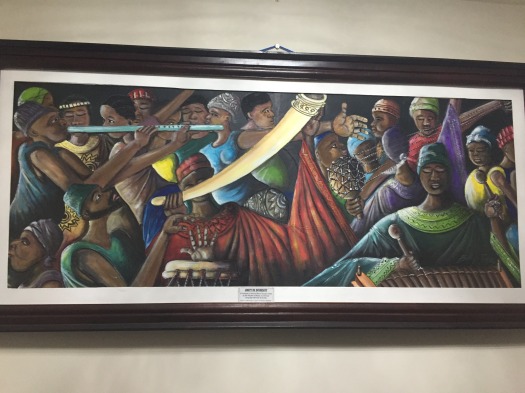 The culture Liberians created has become a melange of African-American and African. Listening to Liberians you can still hear the tones from the old south. Mississippi and Monrovia, though physically distant, are culturally not that far apart. Liberia remains the only other country in the world that uses the US-system of weights and measures (not really fair to call it the British system, since they have mostly abandoned it in favor of metric units). Gas (they don’t call it petrol) and milk are sold by the gallon. As an aside, doesn’t gas, short for gasoline, make more sense than petrol, short for petroleum, which is a non-specific term for any dinosaur juice? The US dollar is the most common currency, favored over the rapidly devaluing Liberian Dollar. Road signs are posted in miles. Liberia is the only English-speaking African country whose English isn’t British in origin, but rather American. 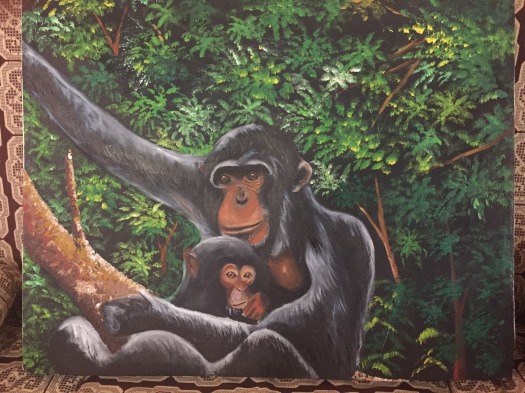 It didn’t occur to me until I began talking to an Americo-Liberian over dinner and drinks that Liberia’s American-originated immigrants have maintained a continuous connection with America for nearly 200 years. This man told me that his family originated in Maryland (the US state, not the like-named Maryland Republic that eventually merged with Liberia and became Maryland County of Liberia). He himself attended high school in North Carolina and college in Baltimore, and worked in northern Virginia for several years. He maintains connections with his distant relatives in the US up to now. These Americo-Liberian settlers hadn’t left America and never looked back. Many of them returned to study in the US and visit relatives who had stayed behind. Many original settlers had been sponsored by abolitionist benefactors with whom they maintained connections. The fledgling country depended on the threat of frequently-passing American warships to protect it from the greedy expansionist hands of its British and French colonial neighbors. For many years, the American company Firestone’s rubber plantations kept the Liberian economy afloat.

Ten of Liberia’s twenty-five presidents were born in America. Three from Virginia, the so-called “mother of presidents” for having been home to eight American presidents. I doubt most Virginians are aware that any of the Old Dominion’s native sons became Liberian presidents, let alone three of them. Liberia is the African child of American parents whose own parents and grandparents had been stolen from Africa.

But all was not rosy between Americo-Liberians and indigenous Africans. American immigrants and their descendants dominated Liberian politics for 150 years. Liberians imposed taxes on the indigenous inhabitants of the interior who benefited little, if at all, from Liberian government services. Uprisings by indigenous Africans were quelled by force. Decades of forced labor in American-owned rubber plantations essentially perpetuated the system of slavery that the original settlers had escaped. All of this eventually and inevitably boiled over into a brutal civil war. Atrocities of the most unthinkable kind occurred on all sides. Samuel Doe seized power in a coup in 1980 to become Liberia’s first non-American descended president. 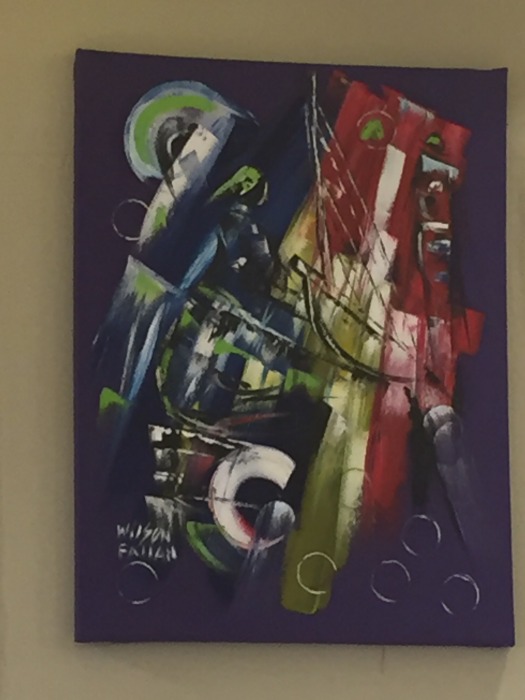 A decade later, Doe would be killed by a group led by the notorious blood-diamond trafficking kleptocrat Charles Taylor. The ensuing civil wars killed a quarter of a million Liberians and displaced over a million more–one-fourth of the country’s population. Eventually, peace was restored, and a progressive democratic surge led by empowered women fed up by men making war saw Liberia elect the continent’s first female president, Ellen Johnson Sirleaf. Today, Liberia is a peaceful place, and the UN peacekeeping mission has left, leaving the future security of the nation in the hands of Liberians. 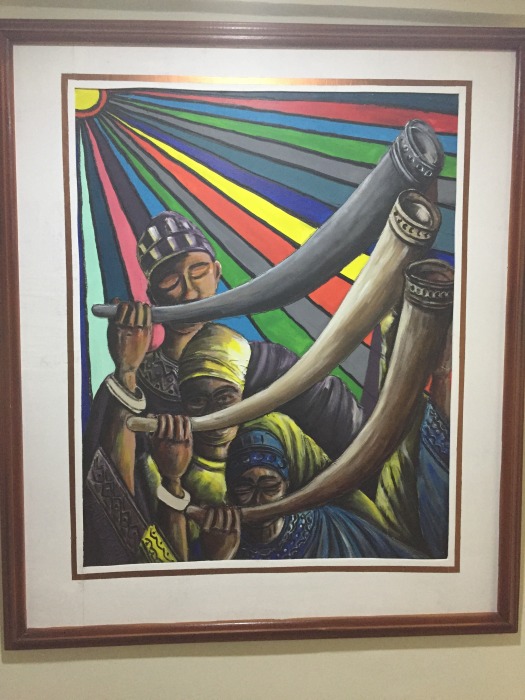 A reluctance to shake hands and the ubiquitous presence of hand sanitizer dispensers are visible reminders of the world’s worst Ebola epidemic that very recently killed more than 4,800 Liberians (0.1% of the population). To a nation struggling to lift itself out of poverty and conflict, Ebola came as a massive slap to the face. Years of civil war. Child soldiers. Crippling poverty. The atrocities of first Doe and then Taylor. Massive unemployment. Fewer than 2% of Liberians with access to electricity. Then, wham! How about some Ebola as a cherry on top? 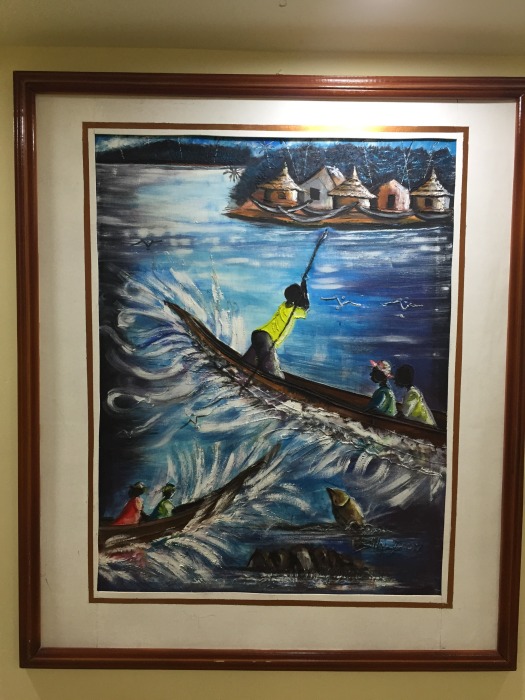 Liberia today is an interesting place. Foreign yet familiar. Poor, but signs of enormous wealth abound. Large American SUV’s ply the wide smooth streets. Barbecued chicken that would be right at home in Jackson, Mississippi can be had for the hefty price of $7 US. New buildings are going up everywhere, next to rusty tin-roofed shacks.

Despite the hardship these people have been through, Liberians are undoubtedly among the friendliest people I’ve ever encountered. Polite to a fault. Quick to smile, and quicker to laugh. They are apparently incredibly prolific artists, because every building I entered had original oil paintings on the walls. I saw a roadside vendor selling artwork. Finished canvases. You don’t that in many places. And it’s good stuff. Vibrant. Bold strokes, vivid colors. No glimpse of Ebola or hacked-off limbs or AK-47-toting tots or blood-diamond smuggling wardlords. Liberians find the joy in life somehow, despite it all.

This is a really interesting and strange place. I only spent a week here. But I like it, and can’t wait to come back.